This week’s eNewsletter Feature
was written by Jim Teague
FPCE director of communications.

In my experience, God rarely does anything for just one reason or one result. He is far too economical for that.

For example, when Jesus sent out 72 of his followers in pairs ahead of him to announce his arrival (Luke 10), he wasn’t just implementing a grassroots marketing plan. By instructing them to go out “like lambs into the midst of wolves,” and telling them to “carry no purse, no bag, no sandals…” he was teaching them to rely on God and to measure the towns’ response to his message. These would be essential skills for the spreading of the Gospel after Jesus had died, risen, and returned to heaven.

There are a few such moments in the nativity story:

By warning Joseph in a dream to flee from King Herod to Egypt (Matthew 2), I believe God accomplished more than just rescuing the Messiah from almost certain death and fulfilling the prophet Hosea’s prediction that “out of Egypt I called my son.” (Hosea 11:1)

In sending Jesus and his family to Egypt and then to Galilee, God also makes them refugees, a special class of people who experience the sorrow of leaving their homes (and often most of their belongings) in search of safety and opportunity.

While the word refugee is not found in the Bible, God’s heart for foreigners, sojourners, aliens, and strangers is apparent throughout (your particular translation may use any or all of those words). In Exodus 23:9, God’s law revealed to Moses explicitly says:

9 “You shall not oppress a resident alien; you know the heart of an alien, for you were aliens in the land of Egypt.

34The foreigners residing among you must be treated as native-born. Love them as yourself, for you were foreigners in Egypt. I am the Lord your God.

In the Gospels, Jesus regularly interacts with, tells parables about, and demonstrates God’s love for strangers.

In the parable of the sheep and the goats, Jesus praises those who loved “the least of these” (which surely includes many refugees) by telling them, “I was a stranger and you welcomed me,” and, “just as you did it to one of the least of these brothers and sisters of mine, you did it to me.” (Matthew 25:31-46) 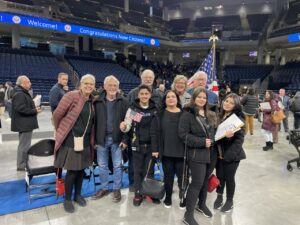 FPCE First Friends and families celebrate after the Naturalization Ceremony.

If you have attended First Pres for any amount of time, you have probably learned that we have a distinct heart for immigrants in general and refugees in particular. In recent years, much of that focus has been on Syrian refugees fleeing civil war and persecution. Our First Friends ministry seeks to build loving, lasting relationships with families in that category.

On Christmas Eve, our annual special offering will go to replenishing our First Friends benevolence fund. FPCE Director of Missions Caryl Weinberg noted recently that the need is especially great right now. We have developed strong relationships with nine families over the years. While all these families are Muslim, they often take part in First Pres events and have become part of our extended family. This past month they invited their friends to join us for the Thanksgiving dinner we hosted, and five new families came.

Great effort and planning are done to make sure we are not creating relationships of dependency. For instance, funds for housing (usually rent) can only be requested once in a calendar year. Because mass transportation is usually available, we often restrict the use of funds for car repairs to those whose vehicles are needed for their work, such as Uber drivers. We have provided computers to students who have graduated from high school and are continuing to a college program where they are necessary.

Much of the benefit to these immigrants is the opportunity to speak English with a native speaker, and to learn and ask questions about the often-confusing cultural differences we have.

It has also been our great privilege to help cover many of the costs involved in becoming a United States citizen.

This past week, Caryl was honored to be invited to take part in the naturalization ceremony held at WinTrust Arena in Chicago. The ceremony was the largest in Illinois history, with approximately 2,000 people from 120 countries taking the oath.

Our relationship with these refugees is about much more than giving handouts and inviting them to events. Many of our volunteers are invited to weddings, graduations, birthdays, and even child births.

You can give now to the First Friends special offering, our you can use envelopes to be provided at our Christmas Eve (4 p.m. and 10 p.m.) and Christmas Day (9:30 a.m.) services. Whatever you choose to give, know that it makes a real difference and is a powerful witness of Christ’s love.

I have sometimes wondered what it was like for Jesus to make the trek to Egypt with his earthly parents. Being fully human, did it shape him for the future? Did he learn to appreciate and value cultural differences? Clearly, Mary and Joseph valued their home country and its ways enough to return and reestablish themselves there. How much might that sense of homeland have rubbed off on Jesus?

I am hoping our heavenly reunion with Jesus will have all those answers. In the meantime, we can ponder all these questions and more at this week’s Children’s Nativity Pageant Worship Service, this Sunday morning at 9:30 a.m., in-person and online.

May your journey through Advent be full of Joy!