This week’s eNewsletter Feature
was written by Jim Teague
FPCE director of communications. 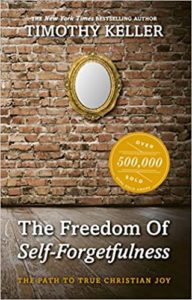 “The Freedom of Forgetfulness” by Tim Keller.

I am embarrassed to admit that I sometimes purchase books based on the cover alone, and occasionally without even really reading the title all that well.

Author and pastor Timothy Keller’s booklet The Freedom of Self-Forgetfulness: The path to true Christian joy was such a purchase.

I saw the subtitle – “The path to true Christian joy”– and thought, “Hey, I’m a Christian, and I want true joy. This is the book for me!” It didn’t hurt that it was less than 50 pages from front to back and well within my budget.

When I sat down and began reading, however, I was confused from the very beginning by the direction Keller took. After just a page or two, I turned back for a second look at the front cover and realized I had misread the main title, mistaking self-forgetfulness for self-forgiveness.

Before I go on any further, let me say I believe self-forgiveness is a good thing. I am reasonably confident Timothy Keller is in favor of it, too, based on his other titles. I consider self-forgiveness a cornerstone of good mental health and an absolute necessity if we are going to “love our neighbors as ourselves” as we are commanded in Leviticus 19:18, Matthew 22:39, Mark 12:31, Mark 12:31, and elsewhere in various epistles.

However, expecting a treatise on self-forgiveness, I opened the book only to be quickly confused by references to Bible passages about humility, servanthood, and having our hearts’ motives exposed to the light. And that was just in the introduction!

I thought I was going to be getting a warm hug, a blanket, and maybe some emotionally soothing hot cocoa, and instead felt as though I was being handed a scriptural broom and dustpan and told to clean out my spirit to make room for the accommodation of the needs of others. Not because of what it would do for them, but because of what self-forgetfulness would do for me and my walk with Jesus.

Once I had finished the booklet, I fully realized I had misinterpreted Keller’s intention, and came to deeply appreciate what he had written. But it took me a while to get there.

Up front, in the introduction, Keller made the case that it is not low self-esteem we should be concerned about (chiefly for ourselves, but also for society in general), but rather a view of ourselves which is too high.

“Up until the twentieth century, traditional cultures (and this is still true of most cultures in the world) always believed that too high a view of yourself was the root cause of all the evil in the world,” Keller wrote on page 9. Further on, he added, “The basis of contemporary education, the way we treat incarcerated prisoners, the foundation of most modern legislation and the starting point for modern counseling is exactly the opposite of the traditional consensus. Our belief today – and it is deeply rooted in everything – is that people misbehave for lack of self-esteem and because they have too low a view of themselves.”

Keller went on to cite a well-published psychologist who had written an article in the New York Times titled ”The Trouble with Self-Esteem” in which (quoting from Keller’s book) “the significant thing she says is that there is no evidence that low self-esteem is a big problem in society.” In fact, Keller wrote, “She quotes three current studies into the subject of self-esteem, all of which reach this conclusion and she states that ‘people with high self-esteem pose a greater threat to those around them than people with low self-esteem and feeling bad about yourself is not the source of our country’s biggest, most expensive social problems.’ “

In the remaining three chapters, Keller went on to highlight three key arguments the apostle Paul makes in 1 Corinthians 3:21 – 4:7:

Keller contrasted various other world religions and belief systems with Christianity and reached the following conclusions:

In Christianity, the moment we believe, God says ‘This is my beloved son in whom I am well pleased.’ Or take Romans 8:1 which says ‘Therefore, there is now no condemnation for those who are in Christ Jesus’. In Christianity, the moment we believe, God imputes Christ’s perfect performance to us as if it were our own, and adopts us into His family. In other words, God can say to us just as He once said to Christ, ‘You are my Son, whom I love; with you I am well pleased.’

Ah. There it was. I had been looking for self-forgiveness but could never get there because the standard I was using was completely in error. I use multiple standards, since I am excellent at comparing myself both to others (who always seem to be better than I am), and to the impossibly perfect imagined self that I always hoped to become. I needed to perform to a certain standard and hope the verdict would fall in my favor.

Instead, the Gospel of Jesus Christ puts everything in reverse. My verdict is already in, and my performance is a response to that verdict. Here is how Keller put it:

How? Because Jesus Christ went on trial instead. Jesus went into the courtroom. He was on trial. It was an unjust trial in a kangaroo court – but He did not complain. Like the lamb before the shearers, He was silent. He was struck, beaten, put to death. Why? As our substitute. He took the condemnation we deserve; He faced the trial that should be ours so that we do not have to face any more trials. So I simply need to ask God to accept me because of what the Lord Jesus has done. Then, the only person whose opinion counts looks at me and He finds me more valuable than all the jewels in the earth. How can we worry about being snubbed now? How can we worry about being ignored now? How can we care that much about what we look like in the mirror? Let me say a word to those for whom this is all new. You may wish you believed this. Here is what I would say – some people have never understood the difference between Christian identity and any other kind of identity. They would call themselves a Christian, they consider their behavior to be on the upper end of the scale, they go to church and they hope that one day God will take them home. Let me say that true Christian identity operates totally differently from any other kind of identity. Self-forgetfulness takes you out of the courtroom. The trial is over. The verdict is in. Perhaps that is new. Keep looking. Keep digging. Keep asking questions.

I have a long, long way to go before I live in a place of self-forgetfulness. But as I have taken the shortest, feeblest of baby steps along that path, the freedom it offers has been cool water for a parched tongue.

This Sunday, Rev. Amanda Golbek will continue our Lenten teaching series “Walking the Path: Choices for every disciple of Jesus.” She will be teaching from 2 Corinthians 5:16-21 on the topic of how we find “A New Beginning” through discipleship with Jesus.

Please join us in person or online as we worship the one who both set the standard for life and then fulfilled it by standing in the gap for us!

Counting the days with you until Easter,

P.S. – If you are interested in the booklet by Keller, you can find it here on Amazon.