This week’s eNewsletter feature
was written by Caryl Weinberg,
FPCE director of missions.

A visit with the families we serve through our First Friends ministry always seems to result in a great story.

On December 7, Sally Ivaska and I formed a tiny last-minute Welcome team tasked with meeting a new family arriving at Chicago’s O’Hare International Airport as refugees from Syria by way of Jordan. 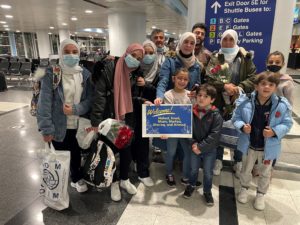 The arriving family is led by Nadine, who is the sister of Amira, who already lives here with her family and has been a First Friends refugee family for almost three years (names have been changed to maintain anonymity). Nadine and her family had been ready to come to the U.S. for several years, but the combination of inconsistent U.S. policies on refugees from the Middle East with the arrival of COVID-19 in early 2020 meant the door to Syrian refugees was closed for a long time — until just this year. Finally, they were given permission to come and live in Chicago.

So, Sally and I – ready with a “Welcome” sign and a bundle of roses – went to Amira’s home to gather her family and head to the International Terminal together.

If you haven’t visited any of our 10 Syrian First Friends families it is always an experience. When we arrived at Amira’s, we were welcomed by each one of the five family members with open arms while being told they weren’t “quite” ready to go.

Though offered refreshments, we declined. Normally, this would have been considered unacceptable, except that they, too, were in a hurry getting dressed up, making sure food was cooked, and preparing their two-bedroom apartment to hold the family of six (on top of their five-person family) arriving that night.

Just before we were leaving, while holding back tears, Amira mentioned personal worries about her pregnancy, and asked if I could go with her to the doctor. She refrained from sharing more details right then because she had to focus on her sister’s arrival and their needs. A hug, a promise to go with her to the doctor and a promise to pray for her were what she needed to carry on at the moment. Sally and I could do that for her, and it seemed to be enough.

We all left the apartment about 45 minutes later, made one quick stop on the way, and arrived at O’Hare’s Terminal 5 just as the plane landed.

All refugees must have a sponsor organization before they can get permission to come. For Nadine and her family, a group known as Refugee One is serving as that sponsor.

We had been informed that the Refugee One staff member and volunteer who arrived would help the family through immigration and help collect and manage the baggage. That should have meant a smooth, swift movement for the family from the plane to where we all waited for them, but instead they exited to the waiting area an hour later, albeit at the wrong door. Sally and I had that other exit covered and saw Nadine and her family coming even before Amira did. 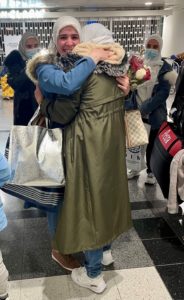 The sisters’ reunion was a wonderful moment, as Amira, having no other siblings in the U.S., embraced her sister with smiles and kisses through tears of joy. The embrace between the two of them kept the sisters captive as the rest of us greeted and welcomed the other members of Nadine’s family.

Finally, after the greetings had ended, we were ready to go. Or so we thought.

The Refugee One staff and volunteer had brought cars which weren’t nearly big enough to hold the family and their luggage. A new plan was quickly improvised as Sally and I gladly helped transport the luggage in our vehicle. (I asked the Refugee One staffer what they would have done if we hadn’t been there to provide the additional transportation. The reply was “They’d have to take a bus.” Imagine that for a first experience in your new home country!)

Nadine and Amira wouldn’t hear of separating the two families in multiple vehicles after only just being reunited. Somehow, 11 people found a way to fit into a six-passenger van. Even so, the families – now together again – were filled with joy.

Once at Amira’s home, neither Sally nor I could stay for dinner, so we left after bringing the luggage to the apartment. I went back a few days later to receive all the hospitality and gifts I had missed the night Nadine and family arrived. (Yes, gifts! Handpicked for me in Jordan because I have become “part of Amira’s family.”)

And then there was a wonderful dinner that we shared — on the floor – because there was no room for all at a table. The case worker for Nadine’s family arrived, and they asked me to stay and listen to make sure the family members were understanding her instructions and asking her all the right questions. Eventually, the kids all went to bed and Amira shared about the problems she is facing with her pregnancy. More hugs, more listening, and more prayers.

The visit turned out to be a very long one; much longer than usual. But once again it served to remind me just how vulnerable a refugee is when he or she arrives here in the United States. Whether newly arrived, or even after a few years, they desperately need friends to love them, to help them navigate doctors’ visits, airports, schools, finding a home, furnishing the home, and more. 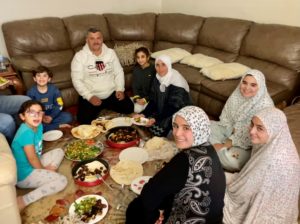 A meal with both families.

They often get overwhelmed, and for good reason. They bottle up the past trauma they’ve experienced inside (although the fear that comes from what they have experienced can never really stay buried), and they know a deep loneliness which comes from being separated from their families, or from losing loved ones to war or persecution. Though hoping for the “American Dream” to come true, they soon realize it takes a long time, hard work, plenty of worrying and wondering, and lots of perseverance.

This latest welcoming experience also reminded me of what a privilege and a blessing it is to walk with a refugee family through the process of making this new place their home. Most refugees desperately want to belong, to be accepted, to have friends, to bless others, and to feel normal in a place where they always seem to stand out.

Yes, they need physical or financial help from time to time, but mostly they need someone to show up and be a dependable part of their lives. They want someone to go with them for appointments and take part in fun outings. It can be as simple as getting together to share a coffee or being willing to laugh with them through the struggles of understanding one another. Just like us, refugees want someone to love their children and to love them.

Walking with a refugee family means having a willingness to introduce them to our friends and loved ones, just as we would for any other friends. It means offering to pray with them to let them know you believe it will make a difference for them and, when possible, it means pointing them to Jesus and his love for them and for us. They need friends. We need friends. They need us. And we need them, too.

Jesus was born “on the road” — not nearby his earthly family’s home — surrounded by strangers. And then he and his family had to flee to Egypt, to save Jesus from being killed. They, too, had to start over, trying to find their way in a country they didn’t know. Though we don’t know that part of the story, I’d love to imagine that there were people who surrounded and cared for them as a family.

Even if they didn’t know it, the Egyptians around Jesus and his family needed Jesus, too, just as we do. And that is why he came: so that we could know him, follow him, and be saved by him. We’ll never be able to “save” a refugee family. But we can know them, follow them, and be a friend for them to follow. And we can point them to Jesus through our love, through our prayers, and through our words. Because Jesus was born for them and died for them — just as he was for us.

If you ever want to try walking in friendship a refugee family, Sally Ivaska, Pastor Younan Shiba, or I (Caryl) would be glad to make the introductions so that you, too, can experience the blessing of coming alongside someone God has put in our path from far away. There is nothing like it! All that is required is to love them and care for them as you would any other friend.

May you all be filled with the overwhelming joy that comes from knowing Christ and his love. And may God give us all avenues to share that love that is given so freely to us all.

“Then the King will say to those on his right, ‘Come, you who are blessed by my Father, inherit the Kingdom prepared for you from the creation of the world. For I was hungry, and you fed me. I was thirsty, and you gave me a drink. I was a stranger, and you invited me into your home. I was naked, and you gave me clothing. I was sick, and you cared for me. I was in prison, and you visited me.’ Then these righteous ones will reply, ‘Lord, when did we ever see you hungry and feed you? Or thirsty and give you something to drink? Or a stranger and show you hospitality? Or naked and give you clothing? When did we ever see you sick or in prison and visit you?’

P.S. – Our special offering to be taken during our two services on Christmas Eve will be going towards our First Friends refugee ministry. This is another way you can be friends to those who are making a new life here in the Chicago area after years of tremendous hardship and trauma. Collection offerings can be given through envelopes in the Christmas Eve bulletin or online here. Thank you for prayerfully considering your gift!