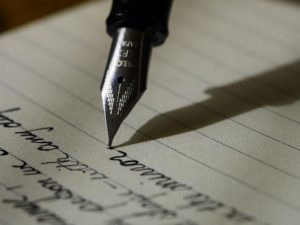 Recently, I was in a meeting where a woman sharing the teaching talked about leaving behind values rather than valuables. I was so touched by that thought; it was one I had not heard before.

I’ve been giving some thought to what I want to leave behind to my closest loved ones. As an example, to my children I leave my sense of positivity, love and resiliency. When I think of my dad, this is also the treasure he left behind for me. If my dad had written an ethical will, I believe this may have been one of the many lines he might have included.

An ethical will is a bequeathal of values, rather than valuables. It could include your beliefs, life lessons, hopes and even forgiveness for family friends or your community. An ethical will is not a legal document; it can be as simple as a handwritten letter or even a video where thoughts and feelings are spoken. It is not necessarily a life story; it’s more about passing on the lessons learned from the many experiences that occur over a lifetime.

The recording of ethical wills dates back to Genesis 49:1 in which Jacob says goodbye to his sons:

“Then Jacob called for his sons and said, ‘Gather around so I can tell you what will happen to you in days to come.’ ”

It has also been passed down in the Jewish religion, in many other faiths, and in the Japanese culture. It seems this idea could connect to anyone of any faith. These days, families are more dispersed than in previous generations, and many grandparents are not around their grandchildren as they were in the past. This means there are fewer opportunities to pass along the family values.

There is a thought that the Baby Boomers really ignited this trend of ethical wills. They are witnessing their parents aging and are hoping to capture their  family legacy before their parents die. At the same time, they are interested in upholding their own life lessons for their children, grandchildren and future generations. The other thought is that 9/11 reinforced for us the notion of mortality. You can be here today and gone tomorrow. It inspires the thought that we have lawyers to manage our property, but what will happen to our values when we are gone?

Some are even sharing who they are, what they believe in and what they have learned in life while they are still alive. There is a strong belief that seeing an idea in writing is more powerful than just hearing it time and time again. Some write letters to namesakes or to unborn children. It tells future generations who they were and what they stood for in life. Anyone can pass on their assets, but their cherished beliefs can be passed on as well.

There are many ways to approach writing an ethical will. One can work from an outline or write in response to a prompting question such as, “What are your hopes for the future?” Also, you might also be inspired by journals or diaries you have kept from your past. Your will can be crafted using pen and paper, or through more sophisticated means which might include pictures, videos or music.

Common themes in ethical wills include:

If you choose to create this priceless gift-an ethical will-remind yourself that passing along your values is all about the life you’ve lived, the example you have been given, and the one you wish to set for others. This could serve as a great opportunity to evaluate your true values and whether you are living them out. Beliefs come from listening to your heart and finding out what matters most to you. They are not simply rules to live your life by, and they can change and develop over time.

Ultimately, your ethical will answers these questions: What do I value right now, in this place, with these people? How do I want them to remember this moment?

“If you’re going to live, leave a legacy. Make a mark on the world that can’t be erased.”

Blessings to all of you this week,