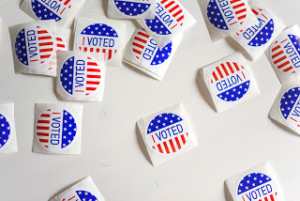 Many of you know that I am not American by birth. I came to America back in 1981 from the grand Island of Jamaica. At that time, President Ronald Reagan had just entered the White House. The Rev. Jerry Falwell was overseeing the Moral Majority, and his core message was to “Bring America Back to God.”

Even then, I found it strange the way politics and faith in America were joined in a symbiotic relationship. The politicians needed the church, and the church needed the politicians — to raise their visibility and fulfill their agendas, both religious and worldly.

Despite the apparent and troubling dilemmas posed by the union of religion and politics, I became a naturalized citizen and have voted in every local, state, and national election since 1986.

Here’s why: The history of Black suffrage tells a painful account of Black citizens being denied the right to vote. On February 26, 1869, four years after the War that presumably “liberated” them, Black citizens (Freedmen) were given the right to vote, but this right was routinely abrogated by racial supremacists who wanted to keep them working as wage slaves on the plantations and cheap labor in “company towns” in the north.

It was not until the Voting Rights Act of 1965 that voter suppression and racial discrimination at the ballot box were officially ended. Think about it, 55 years ago, Black citizens in this country could finally enter a voting booth and participate in the democratic process without threats to life and limb. At least that was what was written into American law. It’s clear in the news today that race-based voter suppression is still a major issue in this country. With all that deeply troubled history, no way am I not going to exercise my right to vote.

The limits of politics

You may not agree with me on this, but politics and politicians are flawed people, participating in a flawed system. As much as I vote and believe in the right to participate in the political process, I do so knowing that the political system has many inherent limits:

The Christian and politics

Politics in America is a “god,” complete with priests, worshippers, liturgy, and its own theological framework of deliverance, not from sin but a shifting scenario of social ills.

Christians shouldn’t first be identified with the party of the Elephant or the Donkey, but that of the Lamb.

Yet, Christians worship at the shrine of American politics more faithfully than they do their local church.

Christians invest more emotion, energy, and time in getting their political messiah elected than sharing the good news of Jesus Messiah with others.

Christians can sometimes be some of the most intolerant, mean-spirited, petty people when speaking with others who might vote for a different candidate.

Christians have turned politics and politicians into an idol. Joe Carter, writing for The Gospel Coalition, poses 21 questions you should ask to determine if you have made politics an idol.

The General Elections are scheduled for November 3. The stakes are high for the future of America.

As Christians, I urge you to pray for America. Pray that the right leader will be elected. But even as you pray, work, and vote, remember that these politicians and the political process are impermanent. All these, too, will surely pass.

Jesus told Pilate that his Kingdom is not of this world (John 18:36). The government will be upon His shoulders, and His name shall be called Wonderful Counselor, Mighty God, Everlasting Father, Prince of Peace, of the increase of His government there will be no end (Isaiah 9:6). Ultimately, we look to the coming Kingdom of King Jesus as our only true hope for the world (See Revelation 11:15).

In Christ our only King,

Please join us on Sunday morning at 10 a.m. for our online worship service at https://live.firstpresevanston.org, and for our new Adult Education Class which begins afterwards on Zoom. Details will be available during the service.

Photo by Element5 Digital on Unsplash