The Crack in Our Liberty 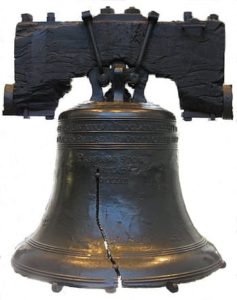 Two hundred and forty-four years ago this Saturday, July 4th, the newly formed United States of America declared to the world that they would govern themselves without regard to the English monarchy’s dictates.

Not everyone thought the Fourth would be remembered as prominently as it is now.  Founding Father John Adams believed that July 2, 1776, was more important since that was the day the Second Continental Congress actually voted to break away from Great Britain. The Fourth was when their formal Declaration of Independence was adopted.

Historians of the American Revolution have said it was the impulse for freedom that invigorated the original 13 Colonies to separate themselves from British rule. In the Declaration of Independence, you can feel the pulse of their unmistakable desire for freedom:

“When in the Course of human events, it becomes necessary for one people to dissolve the political bands which have connected them with another, and to assume among the powers of the earth, the separate and equal station to which the Laws of Nature and of Nature’s God entitle them, a decent respect to the opinions of mankind requires that they should declare the causes which impel them to the separation.”

Here’s a link to the powerful words of the Declaration of Independence, complete with the names of the brave signers of this document.

Two hundred and forty-four years later, with this document presumably fully inculcated into our sense of who we are, our present generation must still ask the question What does it mean to be free? And Who deserves to be free?

With the clarity of our historical lens, and in light of current events, we now know that this question of freedom was not settled for all people, was not afforded equally to all.

On July 5, 1852, former slave and ardent abolitionist, Frederick Douglass delivered a speech titled “What to the Slave is the Fourth of July?”

In the speech, he praised our Founding Fathers for their courage, persistence, and sacrificial spirit on behalf of the nation. The speech was originally delivered at a moment when the country was fiercely locked in debate over the question of slavery.

Speaking to the Ladies Anti-Slavery Society of Rochester, New York, he challenged the hypocrisy of a nation that declared freedom and independence for some but not for all :

“I say it with a sad sense of the disparity between us. I am not included within the pale of glorious anniversary! Your high independence only reveals the immeasurable distance between us. The blessings in which you, this day, rejoice, are not enjoyed in common. The rich inheritance of justice, liberty, prosperity, and independence, bequeathed by your fathers, is shared by you, not by me. The sunlight that brought light and healing to you, has brought stripes and death to me. This Fourth July is yours, not mine. You may rejoice, I must mourn…”

If you have read this far, please don’t dismiss Douglass’ lament as dated, or that “America has evolved to the better angels of her nature.” Indeed, we have changed, and we continue to change, but it’s clear today we still have many rivers to cross before we live up to the noble ideal that all men are created equal, that they are endowed by their Creator with certain unalienable Rights, that among these are Life, Liberty and the pursuit of Happiness.

Yes, America has made progress, but like the Founding Fathers, we must recognize our cultural and spiritual blind spots that cause us to fixate on ourselves, our needs, and while overlooking the “other” and their needs. Pray to God that our great nation will amend her ways, do justice, love mercy, and walk humbly with God (Micah 6:8).

Thoughts of a Naturalized Citizen,