This Special Time of Thanks and Hope 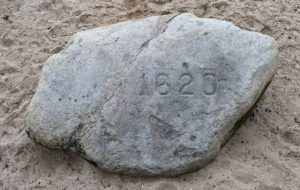 In the Summer of 1974, my parents, two of my sisters and I took a road trip to New England. Along the way, we stopped at every historical event road marker, national park, and “George Washington slept here” tavern we could find.

The farthest East we made it was Plymouth, Massachusetts, and the famed Plymouth Rock. To be honest, the rock itself was a bit underwhelming to a travel-weary pre-teen, and its historic claim to be the 1620 landing spot of the Puritan Pilgrims and their ship, the Mayflower, is dubious, to say the least.

However, like many monuments, it stands for something far more meaningful (and more complicated) than just the ground it occupies or the event it recalls.

Tomorrow, Thursday, when we celebrate Thanksgiving, we’re not simply giving thanks for the survival of the Pilgrims through that first harsh winter, their new experience of religious freedom resulting from their arduous journey, or even the advancement of Western culture in North America (I’m 1/16th Cherokee, so don’t get me started on all of that). It’s a time for giving thanks for family, nation, God’s provision, and, of course, our Christian faith.

I’ll be with my wife’s family along with both my sons (home from college) for Thanksgiving. We’ll watch too much football, eat way too much food (gluten-free pumpkin pie for me), and chat about almost everything (except politics). We will pray together around the table and share, briefly, about something we’re thankful for.

For I received from the Lord what I also handed on to you, that the Lord Jesus on the night when he was betrayed took a loaf of bread, and when he had given thanks, he broke it and said, “This is my body that is for you. Do this in remembrance of me.” In the same way he took the cup also, after supper, saying, “This cup is the new covenant in my blood. Do this, as often as you drink it, in remembrance of me.” For as often as you eat this bread and drink the cup, you proclaim the Lord’s death until he comes.

This Sunday, we will take part in the Communion feast.

Paul’s summary of the Eucharist to the church at Corinth comes after a blistering criticism of those who have failed to measure its importance adequately. I must confess there have been many times when I have been far too casual about the manner with which I have received the elements of the body and blood.

Sometimes I’m distracted as I people-watch those around me. At other times, it’s the worries of the day, week, or month that have grabbed my attention away from the victory of the Cross. Then there are those mornings when I am simply going through the motions, neither consciously distracted nor connected to the elements or their meaning.

Thank you, Lord, that your strength is made perfect in my weakness!

This Sunday is also the First Sunday of Advent, during which the Hope Candle will be lit.

Oh, what wondrous hope! What a great day it is, indeed, when we can celebrate both the coming birth and saving death and resurrection of our Lord, Jesus Christ!

My prayer is that the coming days find you (and me) fully connected to the celebration of Thanksgiving and the eternal hope, faith, joy, and peace of this Advent season.